Your address will show here +12 34 56 78 email@example.com
Haney Circle and
The Lady Abundance Statue
Written and Compiled by Alice Luckhardt
Ethel Porter (owner of the Porter / Owl House at the end of Colorado Ave.),presented a small section of land to the city of Stuart at the intersection of Osceola and Colorado Avenues to be dedicated as ‘Haney Circle’ in 1920. 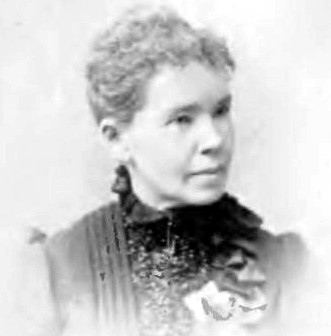 It was to honor her friend Cynthia Burnett Haney, on her 80th birthday, who was a prohibitionist, women’s suffragist, an advocate of social justice and a newspaper columnist.
The only plant in the circle land was a single palm tree in a curbed circular roundabout. By January 1933 Haney Circle was beautified with new shrubs and flowers and was re-dedicated in the Spring of that year by the Stuart Woman’s Club.

The large palm tree in the center remained untouched plus a plaque was placed to designate the circle as a memorial to Cynthia Burnett Haney, (who had passed away in July 1932), women’s rights, prominent temperance worker and founding Woman’s Club member.

Several years later, there was a 10-foot bronze statue and fountain designed by Manya Konolei was selected and sent by French officials for exhibition at the New York World’s Fair in 1938-39, but the advent of World War II halted both its being shown and its being returned to France at the fair’s end, so it was purchased and stored by Thomas Hayes.  He died later and no one came to claim and pay the storage fees. The warehouse operators were permitted to sell it for storage costs amounting to about $2,000. Aura Jones, 1948-1949 President of the Stuart Woman’s Club, learned through her son in New York of the statue in storage. 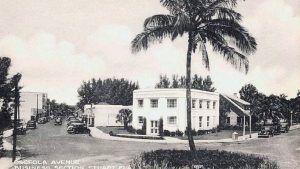 For the $2,000 storage fee, the statue could be theirs.  By March 1949 the Stuart Woman’s Club raised the money to pay the storage fees, the county commissioners voted to cover the cost of $500 to have it shipped to Stuart, all sight unseen.  The statue and fountain were to be placed at Haney Circle in Cynthia Haney’s honor. It’s appraised value was $7,000 in 1949. 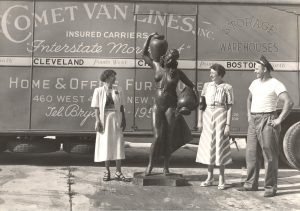 On its arrival to Stuart then un-crated by the Woman’s Club, the scantily clad female figure and the association with wine (grapes) created some controversy, as it would certainly not be considered appropriate to honor Cynthia Haney, the prohibitionist.  A location change was needed immediately. The city approved the statue and fountain placement near the courthouse.

In July 1949,  a Sunday afternoon, the unveiling ceremony of the artist, Manya Konolei’s fountain and statue on the courthouse lawn was held.  Approximately 300 people gathered for the first view of the bronze statue, named “Lady Abundance.”  It was made a gift to the city from the Stuart Woman’s Club. It was Aura Jones, as chairman of the fountain committee had spent months working in collecting funds, arranging transportation and attending to business details of erection.In the name of the club, she presented the fountain “to the citizens of Stuart and of Martin County.”

Over the next decade of the 1950s with the statue being view-able by the nearby county jail’s male inmates, another problem surfaced 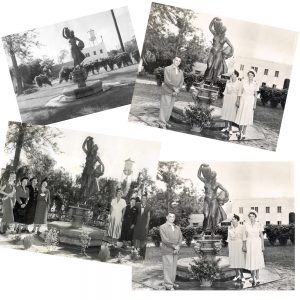 of rude remakes and comments shouted out the windows by the inmates for everyone to hear.

By October 18, 1961, the statue and fountain were moved from the Courthouse lawn to the 4th Street Park aka Veterans Park and later named Memorial Park.  Even in the park, there was some mischievous behavior by teenagers placing lady’s lingerie on the statue or soap in the fountain.

In early 1991 the decision by the Stuart Woman’s Club was made to move the statue and fountain out of the park and have it placed in its original intended location, Haney Circle. It was cleaned and all the fountain was placed in working order.
By April 1991 it was relocated by the Stuart Woman’s Club to its original destination, with the single palm tree removed years earlier.  On April 26, 1991, a big block party was held on Osceola and Colorado Avenues to welcome the ‘Lady’. 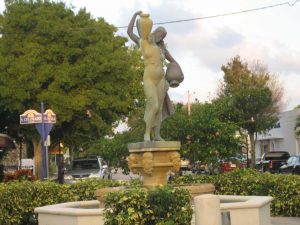